Carlos Cabezas, one of the most international basketball players in Malaga and Premium Group member, gave an interview to the local newspaper Diario Sur at one of the group’s hotels in Malaga, in this case, at La Terraza de San Juan in Malaga Premium Hotel. In the interview by Ñito Salas, the player reviewed his sporting and business career from the rooftop terrace of the city’s first gastro hotel. With an extraordinary sporting background, twice world champion and opportunities to play at the NBA, our partner continues his unstoppable career in the basketball world, while keeping an eye on his businesses with the Premium Group.

In this interesting interview given to the local newspaper, focusing mainly on his sporting career, Carlos Cabezas highlighted his entrepreneurial role, which is bringing him so much satisfactions. As a Premium Group member, he spoke about his participation in the Hotel Alcazaba Premium project (and the success of his restaurant Batik and its terrace), the first of the group, as well as the second project launched in 2017: the opening of our new accommodation, Malaga Premium Hotel, which quickly became a reference among the hotels in the city. Being a gastro hotel, Carlos placed special emphasis on the success and quality of its restaurants. Yubá and Bendito are good examples of the quality, creative cuisine that is the cornerstone of the first gastro hotel in the Costa del Sol capital city.

The point guard, as a good team player, highlighted the work of his partners Juan García, Elisardo Sánchez and José Manuel Montalvo. With this team he recently started La Fábrica project, the group’s latest business venture, which Carlos describes as a pioneering project in the city.

Finally, Carlos Cabezas highlighted how proud he feels about being part of these innovative projects that contribute to the city’s growth. With its two hotels in Malaga, three restaurants and two rooftop terraces, in addition to the recent incorporation of La Fábrica micro-brewery, it is clear that Premium Group is committed to Malaga’s development. Recently, Carlos Cabezas has travelled to Venezuela to play in the FIBA Americas League, although Malaga is undoubtedly his place, the city that saw him grow in every way.

BenditoAMOR: The Most Premium Valentine’s Day 2023 Menu in Malaga

Are you one of those passional people who give a thousandfold in your relationships, taking care of those you love ... 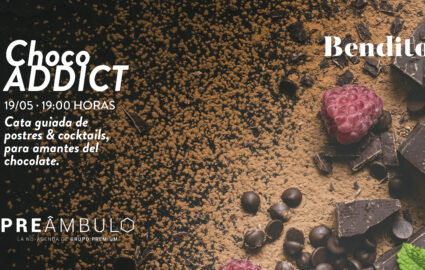 Chocolate Dessert Tasting at Bendito: A Guided Experience with Pairing

Dinner with Live Music: A Taste of Andalusia at Bendito

The Malaga restaurants owned by Premium Group are always looking for the best way to surprise you. This time, Bendito ...

You can find out more about which cookies we are using or switch them off in settings.

This website uses cookies so that we can provide you with the best user experience possible. Cookie information is stored in your browser and performs functions such as recognising you when you return to our website and helping our team to understand which sections of the website you find most interesting and useful.

Strictly Necessary Cookie should be enabled at all times so that we can save your preferences for cookie settings.

If you disable this cookie, we will not be able to save your preferences. This means that every time you visit this website you will need to enable or disable cookies again.

This website uses Google Analytics to collect anonymous information such as the number of visitors to the site, and the most popular pages.

Please enable Strictly Necessary Cookies first so that we can save your preferences!