Best Rooftop Terrace in Malaga: La Terraza de San Juan, the Place to Be on a Night Out according to the Channel Viajar

One of the best rooftop terraces in Malaga, La Terraza de San Juan, is part of a refreshing wave of nightlife that has landed on Malaga to stay. It is already an important part of the downtown urban cityscape and this is what the TV channel for travellers, Viajar, portraits in its series dedicated to cities at night. Hosted by Javier Ojeda, also from Malaga, they show the greatness of these urban oases and of course, our rooftop terrace in Malaga was the chosen scenario to represent them.

It is an open secret that chill out terraces conquered Malaga from the heights. They are a perfect option to enjoy all year round, as the weather on the Costa del Sol is always on our side. So, the channel Viajar focused on the nightlife of cities in its new series and could not miss the opportunity to show this new trend of rooftop terraces in downtown Malaga. The 10th Episode of “Ciudades de noche” Season 1, which will premiere on the channel Viajar on December 26th, could not have a better host.

As a guide for the capital of the Costa del Sol they invited the singer Javier Ojeda, who, among the different spots of our city, decided to show travel lovers what to do in Malaga from one of the best rooftop terraces in Malaga: La Terraza de San Juan, at our hotel in downtown Malaga.

Is it because of its views? Its chill out atmosphere? Its range of cocktails? Or the combination of them all? The point is that experts from the channel Viajar, as well as locals, like Javier Ojeda, choose to enjoy one of the best rooftop terraces in Malaga when looking for what to do in Malaga.

So, if you haven’t already enjoyed our spectacular chill out terrace in the heart of Malaga, don’t hesitate any longer. It is the right choice for a night out with your partner or just with friends. A top plan if you match it with a dinner in one of our restaurants, Yubá or Bendito. In addition, for travellers, there is nothing better than being able to relax with a cocktail in your hand, enjoying one of the best views of the city after a day of sightseeing. Let us offer you an extraordinary night at the top of La Terraza de San Juan.

Christmas 2022 in Malaga: Enjoy a Unique Experience with Grupo Premium

Some significant dates are approaching… Christmas is that time of year in which we like to spend quality time with ... 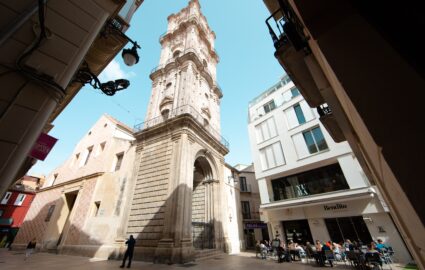 Our gastronomic hotel keeps surprising. This time the star is our chillout terrace, La Terraza de San Juan, which has ...

You can find out more about which cookies we are using or switch them off in settings.

This website uses cookies so that we can provide you with the best user experience possible. Cookie information is stored in your browser and performs functions such as recognising you when you return to our website and helping our team to understand which sections of the website you find most interesting and useful.

Strictly Necessary Cookie should be enabled at all times so that we can save your preferences for cookie settings.

If you disable this cookie, we will not be able to save your preferences. This means that every time you visit this website you will need to enable or disable cookies again.

This website uses Google Analytics to collect anonymous information such as the number of visitors to the site, and the most popular pages.

Please enable Strictly Necessary Cookies first so that we can save your preferences!